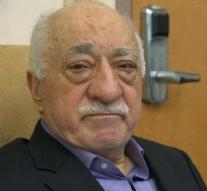 - Turkish cleric Fethullah Gülen will have to fear for possible extradition to Turkey. Ex-General Michael Flynn, a key adviser to Donald Trump and someone whose name is mentioned for the post of defense minister, said in a column that the US Gülen should not offer safe haven.

Gulen has lived since the late nineties in the US state of Pennsylvania. Turkish President Recep Tayyip Erdogan holds him responsible for the failed coup earlier this year and he has several times requested his extradition. The administration of President Barack Obama, however, deterred the boat so far. Ankara asked Trump after his election Wednesday immediate extradition of Gülen.

Flynn describes Gülen as a 'radical Islamist', stating that his organization- which is active in many parts of the world- has all the characteristics of a 'dormant' terrorist network. 'We should offer him shelter,' Flynn writes.