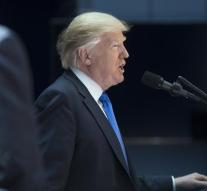 washington - Donald Trump announced for the first time openly that the United States is obliged to help their allies in NATO if they are attacked. The US president did this Friday during a press conference with visiting Romanian President Klaus Johannis in Washington.

During a recent visit to the NATO headquarters in Brussels, Trump had failed to support the mutual assistance obligation in terms of Article 5 of the NATO Treaty in so many words. That caused irritation to allies.

In his election campaign, Trump often criticized the alliance, which he called 'outdated'. The US president repeated Friday that the other Member States of the Alliance should increase their defense spending.