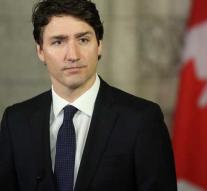 toronto - The Canadian Prime Minister Justin Trudeau has called Monday's massacre in the city of Toronto 'a senseless attack and a horrendous tragedy'. He ruled out that it was an organized terrorist attack. His Minister of Public Security, Ralph Goodale, had previously said that the collisions with a van were not part of a terrorist conspiracy.

A 25-year-old man, Alek Minassian, drove a rented van through one of the main and busiest streets of Toronto, Yonge Street. He deliberately drove pedestrians over a distance of two kilometers. Ten of them lost their lives. Fifteen victims are still in hospital.