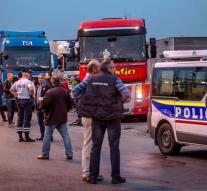 - Truckers hold Monday in the French Calais traffic in protest against the inconvenience of large numbers of migrants in and around the city. The drivers block the A16 motorway and turn slowly actions undertaken.

The truckers get support from retailers, entrepreneurs, farmers and trade unions. They complain that the refugees gathering in Calais hoping to make the crossing to Britain, hindering traffic and activity in the city.

The French government last week tried to soothe tempers. She wants to send additional police to Calais, create a support fund for aggrieved entrepreneurs in life and break down the makeshift refugee camp that the Jungle has become known. However, the measures announced were not impressed.