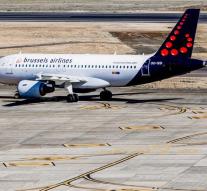 brussels - A group of 41 troublemakers is Saturday afternoon at the airport Zaventem put off a plane from Brussels Airlines to Alicante because they misbehaved, Flemish broadcaster VRT reported.

The group traveled together and some of them were already pretty drunk before they boarded. Once on the plane, it was even worse. Cabin crew was threatened and there would be any 'light' physical violence.

On the way to return to the runway, the captain decided to the gate. As the troublemakers were taken away by police for questioning.

Because of the delay threatened to get the crew on the number of authorized hours. With a hastily summoned new crew the plane could end nearly three hours later than scheduled leave yet.