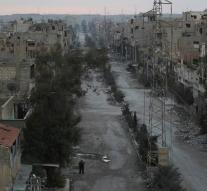 beirut - The government forces of Syrian President Bashar al-Assad are making great progress in the fight against Islamic state and will soon reach the city of Deir al-Zor. The governor of the same-named province, Mohammed Ibrahim Samra, expects the Syrian army within 48 hours in the city.

According to Samra, the army is about twenty miles away, although Lebanese Hezbollah, an Assassian ally, knows that the troops are only ten kilometers from the eastern Syrian city.

The governor said that some inhabitants had already gone to the streets of Deir al-Zor, where a Syrian garrison has been occupied by IS for years under very difficult circumstances. According to the United Nations, the enclave contains about 93,000 people.

In Syria IS is still in three places. Besides Deir al-Zor, those are Idlib and Raqqa.