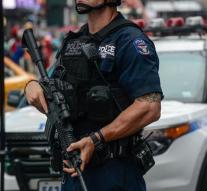 new york - The US Public Prosecutor announced Friday that three suspected terrorists had arrested. He is suspected of raising attacks in New York on behalf of Islamic State.

The trio would have been planning to blast bombs on Times Square in Manhattan and underground. The security services could ruin it.