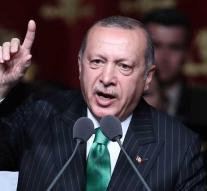 berlin - In the run-up to the Turkish President Recep Tayyip Erdogan's visit to Germany, opponents of the head of state have planned a series of demonstrations. The organizers have announced protests in Berlin, Hamburg, Frankfurt, Düsseldorf, Essen, Bremen, Hannover, Stuttgart and Bielefeld for Saturday afternoon.

The organization 'Erdogan not welcome' expects no more than a few hundred activists to show up in each of these cities. For demonstrations at the end of next week in Berlin and Cologne the organization counts for at least 10 000 participants.

Erdogan is expected in Berlin on Thursday evening. He visits Cologne two days later. It will be his first official visit to Germany since 2014. The relationship between Germany and Turkey fell to a low point due to a series of disputes about Turkey's crackdown after a failed coup in 2016. A subject that is likely to be discussed is the capture of German citizens and journalists in Turkey.