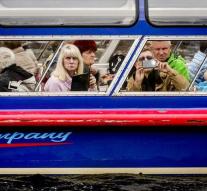 amsterdam - Amsterdam is going to help shipowners who have become dull from the failed licensing system. Their cruise ships are given a proof of consent, according to responsible councilor Udo Kock on Tuesday to the city council.

Amsterdam wanted to tackle the hustle and bustle with a new licensing system for cruise boats, but the Council of State has destroyed a large number of licenses and therefore the old licenses are provisional.

A number of shipping companies had already invested heavily in new ships, and they threatened to prosecute against the municipality if they could not handle the canals. With the hassle, Amsterdam hopes to meet these shipowners. The tolerance is valid until the end of the year. Then there should be new policies.