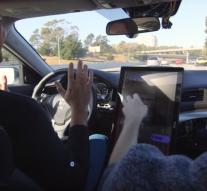 finland - The company Amber wants to run a test with self-propelled cars in the Eindhoven region. Initially, the vehicles are likely to use bus lanes, says a spokeswoman from the start-up Tuesday.

These are electric cars currently used for the car's car service, called Amber Mobility. The customers initially noticed little about the experiment. 'We are likely to drive the cars at low speed on busways at night,' explains the spokesman.

The advantage for the company is that employees do not have to get on their way to pick up the cars. Still, Amber's ambitions go a long way beyond the workforce's work. Amber CEO Steven Nelemans called autonomous driving Tuesday crucial for the future of mobility. 'Autonomous driving is not as far in the future as many think,' he said at the Hannover Fair.

The municipalities of Eindhoven and Helmond are excited about the test.