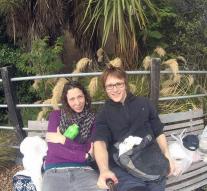 auckland - A Czech woman (27) has been more than a month in seclusion in a hut in New Zealand after she lost her while trekking in a canyon fallen man.

Pavlina Pizova and Ondrej Petr began on July 26 at the long-Routeburn walk in the Fiorland National Park. In bad weather hit the couple lost. After an exhausting night outdoor Petr made a mistake and slipped on the icy surface. The man fell into the ravine. Pavlina climbed down and spent a night at the body of her dead partner.

In order to survive the woman was forced to leave the body. They took shelter in a hut, where they waited for help for more than a month. A rescue operation did not begin until after the Czech consul in New Zealand drew the attention of the authorities to a missing message that the family spread through Facebook. In circumstances doing well with her.

The remote area where the hikers were attacked by bad weather.

'Due to the extremely bad weather we were forced to spend a night in the open. The next day we tried to get to the hut and then it went wrong. I could do nothing for him. I was terrified, 'said the grieving widow. Beside the body of her husband continually rubbed them on her feet that do not freeze. 'In the hut I found food and firewood. Twice I tried to move on, but the high snow and the poor state of my feet kept me in the hut. With ashes I made in the snow the letter 'H'.

The hiker had not reported their planned trip to the authorities, they have been noted as missing. The walk takes a few days. The man's body was recovered.