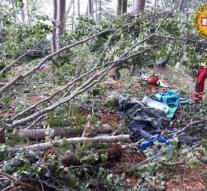 tramontina - A 41-year-old camping guest in Italy was crushed by a tree that overgrown during a heavy storm.

That happened in the valley of Tramontina, in northeastern Italy.

Hett area has been harassed by heat in recent weeks, after which a great deal of emergency weather broke out.

The victim is a Belgian who camped for a meeting of the pacifist group Rainbow Family in the valley. They set up their tent in a remote area to 'together experience their ideology of harmony, freedom and ecology,' writes Het Nieuwsblad.

Because the area was so remote, the emergency services could be difficult to spot. When the forties could finally be freed, he appeared to have already died. His wife and daughter of four are unharmed.

The emergency weather in Italy caused another three victims this weekend.