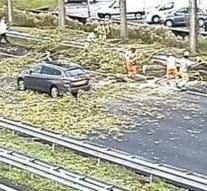 rotterdam - A tree that has fallen on a driving car causes problems on the A13 between Delft and Rotterdam. All three lanes towards Rotterdam are closed, reports the ANWB. There is only a tinker of damage; The driver came free with terror.

Rijkswaterstaat warns that the storm reached its peak only at the end of the morning. 'Throughout the morning, road users have to be extra alert because of the storm,' said a spokesman.