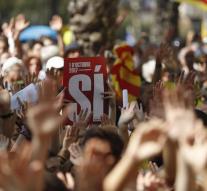 madrid - The Spanish Ministry of Foreign Affairs has issued a travel warning for Catalonia. The Spaniards who travel to the autonomous province should be careful, the department says.

On October 1, Catalonia wants to hold the referendum on independence. But since the Spanish court has banned this and the authorities in Madrid have given the Guardia Civil command to hold Catalan drivers and to hold ballot papers, the tension has risen.

In the Catalan capital of Barcelona, ​​Wednesday night, tens of thousands of angry people went up to protest against Madrid's interference. Spanish travelers to this city are advised to follow the local media on developments. In Barcelona itself, 'people's masses need to be eliminated'.