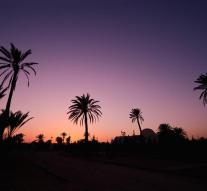 the hague - The travel advice for Tunis and the tourist coastal areas in Tunisia, such as the island of Djerba, has been relaxed. That was reported by the Ministry of Foreign Affairs on Saturday. Travel to those areas is no longer relieved, but there are still strong warnings.

For example, the threat of specifically targeted tourist attacks in travelers' popular places is still high. They must avoid crowded places as much as possible.

Travel in the other parts of Tunisia is discouraged. The safest areas are the border areas of Libya and Algeria, the desert areas of the city of Tataouine and the Chaambi Mountains. Stay there all the way, according to the advice.

In the summer of 2015, an attack in the resort of Sousse took 38 people, including many Europeans. Earlier that year there was an attack on the Bardo Museum in the capital Tunis, with 23 deaths among which 17 tourists.