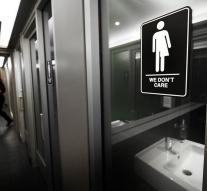 washington - Transgenders sitting in the US Army do not have to leave immediately. They may stay until a study of their situation has been completed.

The US Secretary of Defense Jim Mattis announced Tuesday that the current policy on transgenders in the US army does not change until he advises President Donald Trump in 2018 on the implementation of his transgender policy.

Trump wants to wipe transgender from the army. He instructed the US Army to refrain from recruiting transgenders and stopping the funding for military operations, unless the process is under way. However, it was not said whether transgender already in service should remain.