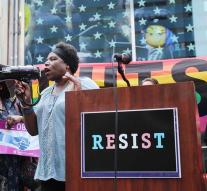 washington - Five US transgender soldiers went to court on Wednesday to challenge a decision by President Donald Trump. He told last month that the US government wants to ward off transgender forces from the armed forces.

The soldiers ask the court to label Trump's transgenderban as unconstitutional and block the introduction. By the president's decision, thousands of transgenderers in the armed forces are in great uncertainty. In many cases, they did not get out of the closet after the Pentagon indicated last year that there was no objection.

The Pentagon has previously indicated that the policy will only be adjusted if Trump comes with an official order. That's still not happening. The White House did not want to respond to the lawsuit.