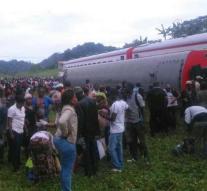 The train was en route from the capital Yaoundé, to the port of Douala. ' I heard noise. When I looked back I saw that the cars were behind us from the rails and started to roll, '' said a journalist who was on the train.

The first images of alleged victims were shortly after the crash posted on social media. On the pictures you can see mangled bodies lying beside and beneath wagons. Ngo'o minister stressed on the radio to only provisional figures on the numbers of victims.

According to the accompanying journalist with Reuters shortly before his departure from Yaounde additional cars added to the train. So could be carried more passengers. It is still unclear whether that played a role in the crash.