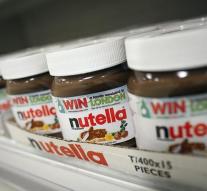 neustadt - A truck trailer with 20 tons of chocolate was stolen in the German city of Neustadt last weekend. According to the police, perpetrators were arrested between Saturday night and Sunday afternoon.

'The value of the spoil we estimate is between 50,000 and 70,000 euros, consisting mainly of Nutella hazelnut pasta and chocolate surprise eggs,' said a spokesman for the state of Hesse. About who is behind the robbery the police are still in the dark.

A research leader doubted whether the thieves were consciously looking for chocolate as a booty. He suspected that the thieves did not know what they were doing.