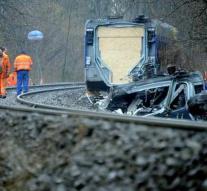 - The traffic controller on duty at the train collision in Germany Bad Aibling on February 9, which twelve people died, has to have declared Thursday to court errors.

He admitted to have turned the wrong signal, and then to have beaten alarm in a wrong way. He also confessed that he was playing despite a ban on his cell phone.

The trial of the forty controller is started Thursday before a court in the Bavarian Traunstein. The accident occurred because two trains simultaneously on a single track reason together. The vehicles clapped head-on. The controller is implemented by death misconduct and faces a prison term of five years.