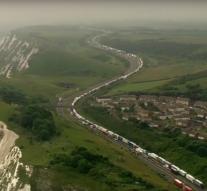 dover - The huge congestion on the access roads to the British port town of Dover last at least until Monday.

British media reported that the authorities Saturday remedy additional border guards have been sent to the port in a bid,, the extraordinary disruption 'of traffic to France.

The traffic jams on the motorways from Folkestone to Dover (M20 / A20) and Canterbury to Dover (A2) cause delays Saturday reaching up to fifteen hours. The files are a result of additional border controls to France performs in connection with the threat of terrorism coupled with a lot of British holidaymakers who want to cross this weekend.


The police Saturday helicopters and motorcycles used to provide the stranded motorists bottled water. Meanwhile run ferries to France half empty, because they have to leave at regular intervals.

The port authorities at Dover have complained that the congestion caused by too few staff in the French checkpoints in the English port. British colleagues will assist them Sunday. According to British media, the traffic jam Sunday though considerably less dramatic than Saturday, but the last 12 kilometers to the port of Dover takes a motorist an estimated at least three hours. Then the waiting begins at customs. Passing the French border takes then certainly half hours of the port authorities.

London and Paris have agreed on border control with British performing in French ports and French checks in British ports.