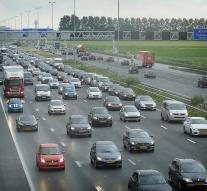 amsterdam - Long traffic jams here and there by accident and dense fog on the Dutch roads. In Amsterdam and Utrecht they were dealing with accidents and for the whole country in a fog warning. Reported that the ANWB.

The files on the A7 and the A8 to Amsterdam are caused by a motorcyclist who crashed in Oostzaan. Of the five lanes there are two open. What time does the road can be released is not known. Between Westzaan and Oostzaan is located 7 km traffic jam. On the A8 10km stopped traffic between Purmerend North and junction Zaandam.

An accident caused Monday morning on the A27 for many delays in the movement of North Brabant to Utrecht. At Lexmond Rijkswaterstaat closed the road after a collision with several cars and a truck. Possibly the accident was caused by fog banks. Visibility was limited at Lexmond to about one hundred meters. The traffic was diverted through the adjacent parking lot. The delay in traffic from Geertruidenberg was great. The lanes on the A27 were released at 07. 15 hours. Detour for Utrecht via the A15 and the A2 long remained the faster route.

In the early morning of Monday comes across the country fog. In Central Netherlands is the visibility locally only a hundred meters. When the fog traffic will suffer from it does not dissolve during the morning rush hour. In Zeeland and Limburg are not rushing for.