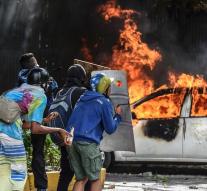 caracas/rio de janeiro - In the protest-stricken Venezuela, the tear gas raises. The authorities have ordered a new quantity from a Brazilian manufacturer, but for the time being, the country does not enter.

After complaints on social media, airline Avianca Brasil announced that none of its aircraft would take Venezuela to take the order. A member of the opposition in Venezuelan parliament had made a document revealing that the forces had ordered a total of 77,870 doses of tear gas from a Brazilian producer.

MEP Williams Dávila has urged his South American colleagues for a producer's boycott when selling tear gas to a regime 'suppressing its own people in Venezuela. '

The protests in Venezuela have killed 71 people since the beginning of April. Thousands of people were injured, inter alia by the use of tear gas.