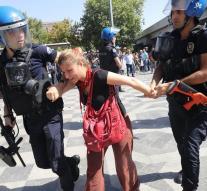 ankara - The Turkish police scattered demonstrators at a court in Ankara on Thursday. There was the first session of the case against two teachers who had been in hunger strike to get back their jobs.

The teachers, professor Nuriye Gülmen and teacher Semih Özakça lost their jobs because they were suspected of involvement in the failed coup last July. The two arrested in May have lived for months on liquids and supplements, and their condition is dangerously weak.

The two teachers should not come to court because they could flee according to the authorities. Against their lawyers, who were not there, his arrest warrant was issued.

The Turkish Dutchman Volkan Caliskan stuck in Turkey for two weeks last month for his support for the duo. He was arrested together with others during a football match because they were behind a banner on which a backing was given. He has been released but is still a suspect and does not leave Turkey.