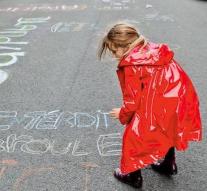 amsterdam - Dutch municipalities have many prominent rules. These include curse and curse ban,

This is apparent from a Friday published research of RTL news to General Local Regulations.

The journalists discovered, among other things, that 364 municipalities have actually put down pavers. The local rules include that written permission is required for the use of characters or texts with chalk. Fifteen municipalities have forbidden curses with the name of God.

More striking is a prohibition of Deventer: there may not be dressed by people before the entrance and after the exodus of Saint Vincent, when the good-natured man goes to the street. In Bunschoten it is illegal to sell or distribute condoms or other contraceptives on the public road.

According to professor Jon Schilder (state and administrative law) some rules are especially symbolic. 'The curse states that they do not apply if Article 7 of the Constitution (freedom of expression) applies. Article 7 is always applicable when expressing feelings and thoughts, including curses. '

Several municipalities confirm that the researchers have put the knife in unnecessary regulations. At the beginning of the year, Oosterhout scraped about half of its rules. Dutch crown would have decided two years ago that about two thirds of the rules were superfluous. Since then, sidewalk crates and walk in plantations there again.