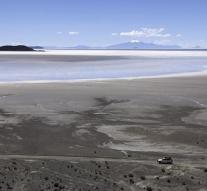 - In a jeep accident in Bolivia, at least five tourists were killed. It involves three Belgians, an Italian and a Peruvian. The driver and two other tourists survived the accident.

The three Belgian victims were friends of each other. They traveled to Belgian media throughout the summer and Latin America would go home in a week.,, It is incomprehensible that this was really a dream trip for her, '' said a relative of a 25-year-old victim at Het Nieuwsblad.

The jeep was on its way to the Salar de Uyuni, the largest salt flats in the world, for a multi-day expedition. Along the way the vehicle is hit on the head. According to police, the bodies of the victims to be transferred to a hospital.