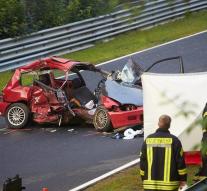 - On a Saturday night toeristenrit his two passengers were killed on the German circuit Nürburgring. The car in which the victims were flying at high speed out of the turn. Two marshals, employees of the circuit, were seriously injured. A driver of another car was lightly wounded.

The accident happened in the 'Nordschleife', the notorious and dangerous part of the circuit. Came here in the past five drivers from Formula 1 for life.

The circuit will be open regularly for racing enthusiasts who may depress the gas with their own vehicle.