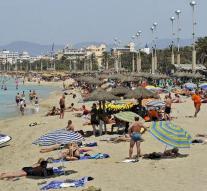 palma - Holidaymakers must note that they will pay twice as much tourist tax on Mallorca and the other Balearic Islands next year. According to Podemos foreman Alberto Jarabo, the left-wing coalition of the autonomous Spanish region has reached a principle agreement. The details will be completed on Thursday.

Adult visitors to Mallorca, Ibiza, Menorca and Formentera will see an additional amount of 4 euros per person per night in 2018. That is still depending on the accommodation, between 50 cents and 2 euros. Due to the sharp increase in the tax already argued, last summer only last summer, the authorities in Palma want to collect a total of 100 million euros a year. The money will be spent mainly on environmental projects.

The association of hotel owners calls the measure catastrophically. So far, she has not seen anything about investment, estimated at 50 million this year, and says that the revenue serves to close the gap in the budget. During the low season, between November and April, tourists pay half the fee. Well, there is a plan to start the summer in March.