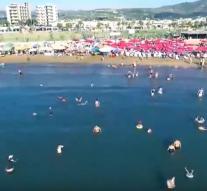 tartous - The tourist office of Syria seems to be nothing to attract the five years raging civil war. The latest promotional video are crowded beaches and carefree bathers to see on a jet ski.

The decor of this seemingly carefree holiday is the Syrian coastal city of Tartous, which last May was still affected by a series of suicide bombings by Islamic State. It certainly were 150 deaths. The video ends with the slogan: 'Syria, always beautiful.'

When conflict 300. 000 civilians died. Tens of thousands of Syrians have fled the country. Parts of the country were hit by Russian, Turkish and American bombing of IS and opposition groups.


The coastal provinces of Latakia and Tartous since 2011 firmly in the hands of government forces. In the past, rebel groups repeatedly attacks carried out in the fields.