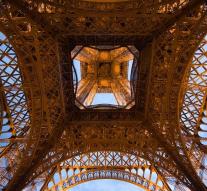 paris - Tourism in Paris suffered a severe blow last year, including terrorist attacks, but this year tourists can find the way to the French capital again. Especially Americans and Chinese have returned massively in the first half of this year, the newspaper Le Monde reports on the basis of figures from the regional tourism office.

The number of hotel guests rose by 10.4 percent to 16.4 million in the first six months of the year, the largest since 2008.

Last year, mainly Japanese and Chinese remained after Paris in November 2015 and Nice in July 2016 were hit by terrorist attacks. Images of overcrowded binoculars in the city through a strike of the cleaning service and of massive and sometimes violent strikes against labor law did not make the attraction of the City of Light any good either. Thus, Paris suffered a loss of revenue of 1.5 billion euros last year.

Tourism is also growing in the rest of France, but less sharply. The country had 96.8 million hotel nights from January to June, an increase of 4.6 percent.