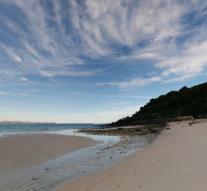 bangkok - The Thai authorities are seeking the identity of a diver who was Friday found dead and maimed in the sea at Samae Beach on the coast tourist resort of Pattaya. The man's throat was found slit and his body was tied to a buoy.

Although there is a backpack was found containing a wallet, there is no proof of identity was found. Police suspect that his throat was cut with a knife. A man on a jet ski struck the lifeless body and hit the alarm.

The police is currently investigating into hotels and hostels to find out if anyone is missing. There is also contact with foreign embassies.

The British newspaper Daily Mail has published shocking pictures of the body of the man.