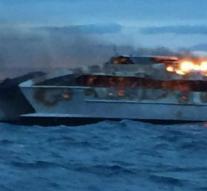 gladstone - Eleven tourists have been injured during a trip to the Great Barrier Reef in Australia. The boat in which they were caught fire and sank. The 42 passengers on board, mostly Chinese, and four crew members were able to bring themselves in time to rescue rafts to safety. They were bobbing picked up at sea after two hours. Some were found to have broken ribs, others had hypothermia or seasick.

An additional drawback was that most of the tourists could not swim. After several hours bobbing they were rescued by the rescue team and taken to the coastal town of Gladstone. The police reported that 19 people were taken to hospitals in Gladstone and Bundaberg, but none of them was seriously injured.

,, The crew assured us that the engine had been hit just overheated, but the situation quickly ran out of control, '' said Karl Burton, an Australian participant in the trip, the television channel ABC. The large coral reef off the east coast is one of the main attractions of the country every year more than two million visitors.