Home / World / Tour on tv is for the elderly 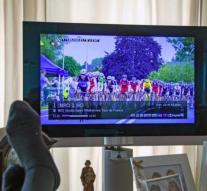 hilversum - Watching the Tour de France is mostly a hobby of the elderly. People under the age of 50 have little interest, according to research into the look at the first week of the Tour.

Cycling enthusiasts can catch up on live shows (NPO), the Evening Stage (also on NPO) and the RTL Tour du Jour program. The media purchasing agency Magna reports on the figures of the viewing behavior (from SKO) that the Tour TV viewer is especially gray.

Wilfred Genee scores a slightly younger audience with his Tour du Jour: 'only' 60% of viewers are over 50 years old. For Wilfred and his team this is a consolation because the total number of viewers to the RTL program is against. Tour du Jour achieves over 200,000 viewers on average over 900,000 for the Evening Tape.