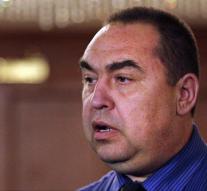 lugansk - The leader of the pro-Russian rebels in the eastern Ukrainian Luhansk province has been hit Saturday morning seriously injured by an explosion in his car. According to the rebels their leader Igor Plotnitsky was the victim of an assassination attempt.

Plotnitsky sustained the injuries are not life threatening, report the Russian news agency Interfax on authority from a source at the hospital of Lugansk. Besides the rebel leader would some others were injured.

Plotnitsky leads the People's Republic of Lugansk proclaimed pro-Russian separatists who wants to join big neighbor Russia. The Ukrainian army tried unsuccessfully over the years to get under control the province. The government army denied Saturday that it had a hand in the alleged attack on Plotnitsky, the BBC reports.