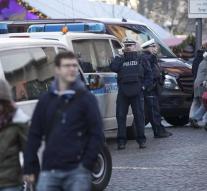 cologne - Great excitement Tuesday in Cologne, Germany, a day after the bloody attack in Berlin drove a truck on the Christmas market at a stall. However, it turned out to be an accident and not an attack, according to German media Tuesday.

' We could conclude quickly that it was an accident, '' said a police spokesman. Two visitors to the market on the Heumarkt were slightly injured by parts of the booth ended up on them.