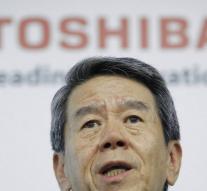 - Toshiba is challenging five former top officials in court in connection with the accounting scandal at the Japanese technology group. Toshiba requires them to an indemnity the equivalent of 2.3 million euros, the company made ​​known Saturday.

Three of the five defendants are former presidents, including Hisao Tanaka who resigned in July because of the fraud. The other two occupied in the past, the position of Finance Director.

An external study showed in the summer that top officials for years had inflated earnings. That happened in a culture that subordinates were afraid to turn against the trickery of their bosses, the researchers said.