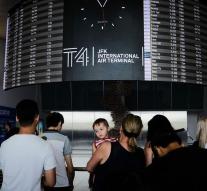 new york - The air traffic at New York Airport JFK has stopped for a remarkable reason Friday night (local time). Dozens of tortoises were croped from neighboring Jamaica Bay and landed on a runway.

A number of flights had to wait until animal warders had captured the diamond turtles. The animals were resettled in a safe place.

The turtles come out every summer in the summer to lay eggs on the beach. Normally they are held at JFK by a fence of plastic pipes, but it appears to be flooded under flood, allowing the animals to swim over it.