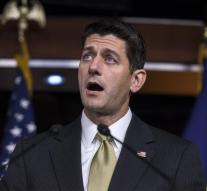 washington - The Republican president of the US House of Representatives wants to talk with the opposition on migration legislation. Paul Ryan told The New York Times to hope his party and the Democrats could come to an agreement.

Ryan responded to a question about the so-called DACA program, which President Trump wants to abolish. He gave Congress a half-year to make an alternative arrangement. The program protects migrants from expulsion who illegally entered the United States as a child.

President Ryan stated that the problems surrounding DACA are a consequence of the lack of surveillance of borders. He hopes to be able to conclude an agreement with the Democrats in which measures to better protect the border are combined with protection for the DACA migrants.

The president made them clear on Thursday that they do not have to fear for the time being for deportation. 'For all (DACA) who are concerned about his status during the six-month period. You do not need to fear anything. No action, 'he tweeted.