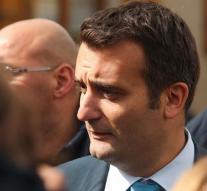 paris - A topman of the French populist party Front National (FN), Florian Philippot, has left the party on his own. Philippo had for years the right hand of party leader Marine Le Pen and vice president of the UN.

Le Pen had relieved Philippo of his duties because he refused to take away a union, Les Patriotes, which he had set up in the front after the election defeat in May. Philippo told French media on Wednesday night that he did not make a mistake and turned the party back.

Les Patriotes, a 'party in the party', contributed to the quarrel in the front about why the elections were so disappointing this year. Philippine Les Patriotes has presented itself mainly as a kind of thinking tank that ages the euro.

Many party members think that Philippine's advice to Le Pen for the campaigns in 2012 and for the elections in 2017 had prevented many voters from choosing the front. In particular, the fierce repudiation of the euro that Philippo implies would have been responsible for the disappointing results.

Le Pen is also under fire and has recently distanced itself from Philippine's hard protectionist line. Philippine believes that Le Pen focuses only on French identity and immigration, 'the party in its backward turn', which may make the FN fatal.