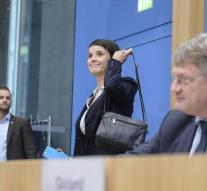 'After the latest outburst of Frauke Petry, who is hardly overcome with regard to the lack of sense of responsibility, I demand that she abandon her position and leave the party and not cause any further damage. '

Petry came to a surprise announcement at a press conference on Monday with the other list trainer Alexander Gauland and co-chairman Jörg Meuthen: she suddenly said she did not want to be in the AFD group.

Petry, who had several clashes with Gauland and Weidel in particular, was elected as deputy of the East German constituency of Sächsische Schweiz. The AFD now has 94 of 709 seats in the German Lower House. At least, Petry.

Because Petry continues as a one-man fraction, the fraction of AFD becomes smaller. Possibly a broader break may be announced. German media are already speculating about the formation of their own party. Petry still has faith in AfD and could try to set up her own conservative party to run 'Real Politics', and run less ruthlessly opposition, as she criticizes her party top.

READ MORE: 'Petry through as a one-man fraction'