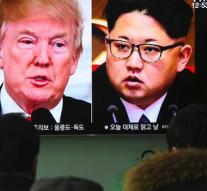 washington - The proposed meeting between US President Donald Trump and North Korean leader Kim Jong-un is historical in advance. It has not happened before that the leaders of both countries looked each other in the eye.

The top has a load that can be compared to the reception of Richard Nixon by Mao Zedong in China (1972) or the talks between Ronald Reagan and Michael Gorbachev in Iceland (1985). The question is where Trump and Kim will shake hands for the first time.

There is a good chance that the meeting will take place in a relatively neutral area. Trump will not give Kim photos in Pyongyang and the North Korean leader does not want to be a requesting party in the United States, analysts say.

A meeting in South Korea or the demilitarized zone between the two Koreas is possible. China, Japan or the United Nations in Geneva can also act as host.

In the past, such sensitive buds have also been kept aboard a ship. US President George Bush met the Soviet leader Gorbachev on a ship in a port of Malta.

It is not known whether Kim is willing to travel abroad. He has not done that since he came to power in 2011.