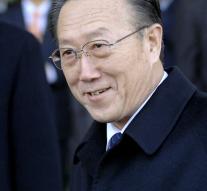 seoul - A high-ranking official and advisor to the North Korean leader Kim Jong-un is deceased in a car accident. That made the state news agency KCNA announced on Wednesday local time.

Kim Yang-gon, including Secretary of the Korean Workers' Party, was the best friend of Kim Jong-un, a reliable, revolutionary comrade , according to KCNA. He was also part of the delegation that is negotiating with South Korea.

Kim Yang-gon was 73. There is nothing known about how the accident could happen.