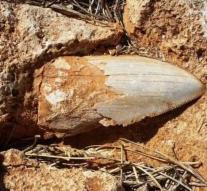 canberra - Thieves have stolen the tooth of a megalodon in Australia, a huge shark species that died about 1.6 million years ago. The fossil disappeared from a national park, reports Australian media.

The authorities had kept the location of the tooth as a precaution. The fossil was still attached to a rock in the Cape Range National Park. With a hammer and chisel, the tooth was supposed to be cut loose in five to ten minutes, said a local manager from the Department of Parks and Wildlife, the government agency that manages nature parks.

It is still unclear how the thief came after the existence of the fossil. 'Only a few local key figures actually knew where it was,' the manager said. He suspects that a local collector wanted to add the 8 to 10 centimeter long tooth to his collection. The object has an estimated value of several thousand dollars.

The megalodon could be up to eighteen meters long.