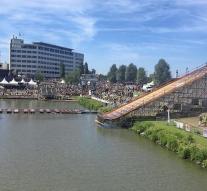 venlo - At the obstacle run in Venlo where a fatal accident occurred last week, too few divers were active. According to the license, there were six divers and four rescue swimmers, but in reality there were four divers and two lifeguards, the organization acknowledges the De Limburger.

At the obstacle run, a 29-year-old woman died when a rear participant fell by a slide on top of her. According to the organization, a smaller number of divers and lifeguards were chosen than was included in the license because there were many fewer participants on Saturday.