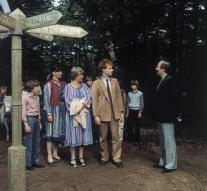 - The famous book The songwriter of writer Tonke Dragt becomes a game. The game helps children in a fun, accessible way to increase their reading levels, published the publishing house Zwijsen on Thursday.

The book of Dragt from 1966 tells about a primary school teacher to save a boy from his uncle's hands, Count Grisenstijn. His uncle locked the boy, Geert-Jan, in the stairwell because the guy is the only one who can find a treasure hidden in the building.

The book was filmed in 1982 by director Karst van der Meulen. The NCRV series, starring Peter Bos, Ferd Hugas, Cor van Rijn and Kitty Jansen, kept the Dutch youth ticking for weeks. Since then, the series has been repeated many times.

The educational game will be released on July 5th. According to the publisher, The Sevens jump is 'as exciting as Minecraft'.