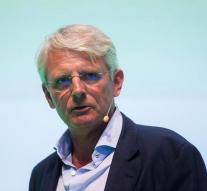 amsterdam - TomTom has seen decline in turnover and profit in the third quarter. The navigation specialist gave to all to recently with a stronger decline in demand for the navigation tables that have made the business. The introduction of new products which have not leveled setback yet.

The company from Amsterdam achieved a turnover of 239 million euros compared to 254 million a year ago period.

Despite the problems with the sale of navigation tables, which greatly suffers from competition from navigation on smartphones, TomTom still boast successes in the automotive industry.