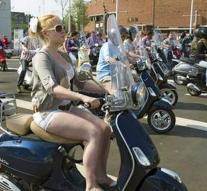 - TomTom will also focus on the market for two-wheelers with its navigation equipment. The company presented Thursday at techbeurs IFA in Berlin TomTom VIO, which is designed specifically for scooters.

The touchscreen of the VIO is designed so that drivers can operate it even when wearing gloves. Scooter Riders get the information both on screen, which is protected against wind and weather, as well as via a Bluetooth audio system inside the helmet. In addition, the gadget is also an extension of the smartphone and will the scooter riders possible to handsfree.

The scooter application will be equipped with a warning system. At too high a speed, the screen will turn red to warn the driver. Therewith according TomTom drivers more aware of their speed.