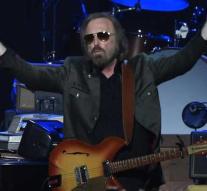 los angeles - The fatal heart attack to which the American rock musician Tom Petty (66) died last October, according to the autopsy, was caused by an 'involuntary overdose of medication'. According to the report of the physician that Friday (local time) was revealed there were traces of seven substances in his blood.

It was a mix of painkillers, sleeping pills and tranquillizers: fentanyl, oxycodone, temazepam, alprazolam, citalopram, acetyl fentanyl, and fentanyl.

According to the widow (Dana) and daughter (Adria) of Petty the singer broke a hip on the day of his death and suffered unbearable pain. He had suffered from knee complaints for a long time and also used painkillers for this. In a message on Facebook, Dana and Adria say that Tom 'may have taken a fatal dose of medication because of that pain. '

Petty, according to manager Tony Dimitriades, suffered a heart attack in his home in Malibu. He was transferred to the hospital, but nothing more could be done for him.

The singer-guitarist got world fame with his band Tom Petty \u0026 amp; The Heartbreakers, founded in 1976. He already had big hits in the early years of his career as Breakdown and American Girl. Several more would follow. In addition to the Heartbreakers, Petty also had success as a member of the super group Traveling Wilburys, with Bob Dylan, George Harrison, Jeff Lynne and Roy Orbison. He also released a number of solo albums.