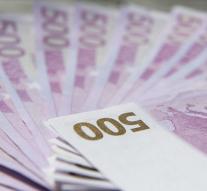 geneva - Who has stopped stacking 500 euro notes in Geneva in the last few months? That question hopes that the Swiss Public Prosecution Service will be able to answer quickly. The case is stinking.

Great chance that you've never had one in your hand, but in Geneva this year, you pay big amounts of 500 euro bills from a toilet.

Up to four times, the police in Geneva over the last couple of months have packed money from several WCs. The toilets were so stuffed with letter money that clogged the mess.

Three times it was hit in restaurants and once in a toilet of a bank branch, near a room with lockers. That confirms the Swiss Public Prosecutor's Office after reporting in a local newspaper.

Many letters are cut through the middle with a scissors.

Who does this, but also especially why, is a big mystery for now. But, the OM said there: 'Here's a story to be left behind. That is why we started an investigation. 'Whether it's real money, the prosecutor does not say that.