Home / World / 'Together against Turkish quarrels' 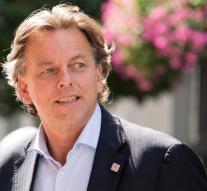 - European countries will see how to deal harmoniously with the tensions in Europe as a result of the failed coup in Turkey. Although the conflict to country within the Turkish community of land, a coordinated approach is wise.

That was one of the outcomes of the consultations that EU foreign ministers had in Bratislava, partly at the suggestion of minister Bert Koenders. The ministers tried in the Slovak capital to improve the difficult relations with Turkey.

,, It is important for keeping the harmony and no atmosphere of intimidation being created, '' Mr Koenders said Saturday about exporting Turkish problems to European countries.,, We do not want intimidation and stigmatization in our societies, and also expect Turkey to actively contribute. ''


For example, in countries like Germany, Denmark and Belgium are conflicts between supporters of the Erdogan regime and supporters of the alleged mastermind behind the coup attempt, the US resident Fethullah Gulen. In Turkey, tens of thousands 'Gülenisten' arrested or branded a terrorist and put on a siding.

EU foreign policy chief Federica Mogherini will identify the problems in the various EU countries and the Netherlands will make a number of countries considered, he said.

In the Netherlands, since the foiled coup 175 declarations made inter alia threat. Erdogan called supporters to tell on their opponents NSB. It is a kind of school battle going on with parents of Turkish origin their children away from schools with the 'wrong' ideological background. Prime Minister Mark Rutte said on Friday that they have no evidence of direct interference by the Turkish government in the Netherlands.